JOHN DRUMMOND holds a real estate agent MARGARET LORD hostage in an office she is showing, and threatens to shoot passing people from the window.

Slowly the reason for Drummond’s anger is revealed…

‘Callan’s not so lonely now”

Poor Edward Woodward!  His ruthless, cynical Callan image is shattered by his leading lady in a new film.

Blonde June Ritchie, 30, said: “Off-set he never stops telling jokes and anecdotes.  He’s so funny really, he should have been a comedian.  No-one would believe it.  I don’t think I have ever laughed so much with anyone.”

Miss Ritchie is Woodward’s co-star in ‘Hunted’ – to be released in London in the spring.  They are the only two in the picture – which will be a change for Woodward who had a faithful sidekick called Lonely in the Callan series.

In the new film, June plays a leggy estate agent who gets trapped in a rooftop attic with Woodward, who is an assassin called Drummond.

He has his sniper’s rifle trained on the street as Miss Ritchie attempts to persuade him not to pull the trigger.

June is back in films after a long absence as a housewife and mother.  Husband, city financier Marcus Turnbull and seven-year-old daughter Adelia have given their blessing to her return.

And she landed the role many actresses would have given their hearts to play.

She said: “Ted is magnetic.  He’s so mean and ruthless in his role as Callan.  It generates all the deep-down emotions a woman has.  There’s always that feeling inside there’s a chance…”

The film is the product of American actor-producer Mike Sloan, 25, and Peter Crane, 23.

Last summer Woodward, who is an antique collector, peered through the window of an old gunsmith’s hop in Soho.  Mike Sloan was helping in the shop and exclaimed: “If we can’t sell you a gun, can we sell you a script?”

The script was for “Hunted”.  Three days later Woodward said he was willing to shoot the picture.

June said: “I don’t think there was a big budget for the picture.  It was shot on goodwill, patience and faith.  We all settled for a percentage of the profits.”

Callan – Drummond – Woodward – whoever.  He’s got a speculative eye – especially for a good leading lady for his first big role on the big screen.

Remade for television as ‘Alfred Hitchcock Presents: The Hunted’ in 1988, also starring Woodward. ​ 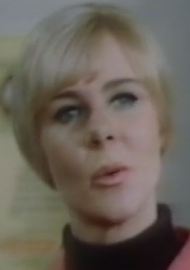 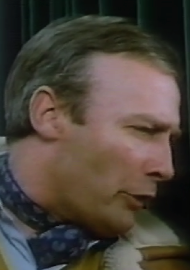