Manchester draftsman VIC BROWN becomes involved with secretary INGRID ROTHWELL, who works at his firm. After they sleep together, she gets pregnant. Vic feels a sense of responsibility and proposes marriage.

The couple are forced to live with Ingrid’s mother who treats Vic with contempt because of his working-class background.

But, when tragedy strikes, Vic must decide what his new wife means to him.

“June Ritchie, is from Manchester, and was straight out of R.A.D.A. Ultimately, the two of them worked together marvellously but at first there was a certain breaking down of barriers that had to be done.  Particularly on the part of Alan Bates, who is a much more conscious actor than June who is more intuitive. She could ad lib a whole conversation much more easily than Bates could. He liked everything a little more carefully worked out.I think this came about quite quickly, as soon as we all of us got used to working together. It is, I think, a very difficult thing for an actor who has been closely involved in a part in a long run entirely to discard it in one week, and realistically play an entirely different sort of character, before the critical eye of the camera. I found that during the first weeks of shooting Alan needed more takes than June did, and whereas his performance improved by, say Take 7, she was always better in the earlier ones.”

June Ritchie, this month’s colour pin-up, is an ordinary girl with extra-ordinary talent. This was the impression I gathered on meeting her in her small basement flat which she shares with another girl just off Sloane Square. I met her the day following the premiere of her film A Kind of Loving, but neither the audience’s acclaim nor the rave notices of the critics had gone to her head. She received my congratulations with a shy smile, and I asked her how she felt after the furore which she and Alan Bates have created in the cinema.

“I can’t speak for Alan,” June answered, “but for myself I can only say I am a little bewildered by it all. I wanted to be a success and I’ve tried hard to be a success. Most of all I’ve tried to meet the challenge of a big screen role, with no filming experience whatever.”

No challenge can come bigger than that, and I asked her where she had found her inspiration.

“It’s the urge of actress in me which has driven me since i was eight years old,” she said. “Also I wanted to justify the sacrifices my parent shave made for me, and I shall try to repay them for all they’ve done.”

“I know they were present at the premiere last night,” I said. “What did your father think of the scene which the Press has described as ‘a sizzler’?”

“He thought the nude scene was artistically directed and not in the least objectionable,” June answered firmly.

It was her parents who insisted that before she tried her luck at acting she should first qualify as a secretary.

“They gave me good advice,” said June. “Show business is dicey at best, and a girl should be equipped to earn her living outside it if she can’t make the grade. I enjoyed my work as a secretary and I think I was popular in the office – except on one occasion,” she went off into a peal of laughter. “One day I was in the ‘ladies’ washing up the tea cups. I always sang when I did this chore, and on this occasion they came running in to tell me to shut up as there was a board meeting going on and the chairman couldn’t hear himself speak.”

The Stretford Children’s Theatre in Manchester, a scholarship to to RADA, two years’ study, a small understudy part in a play which folded in six weeks – that is the sum total of June Ritchie’s career before she sky-rocketed to success in A Kind of Loving. I asked her what her next part was to be, and what kind of parts she is looking forward to in the future.

“I am playing the part of a more mature girl in a tragi-comedy called Live Now, Pay Later,” she said. “My future plans are not as yet decided, of course, but I would like to spend the next twelve months at least exclusively in films. Naturally I would like a stage part one day, preferably in musical comedy.”

June admitted to a rather unusual hobby – at least among actresses.

“I simply adore running, both as a means of keeping fit and for its own sake,” she told me enthusiastically. “On Monday, Wednesday and Friday evenings, wet or fine, I do a complete circuit of Hyde Park – without once stopping for a rest!” she added triumphantly.

“Boy friends, yes – a boy friend, no! June answered emphatically. “I have a long way to go and there’s a lot of hard work ahead of me. I shan’t be thinking of marriage for a long time yet.”

NB She was married within six months! 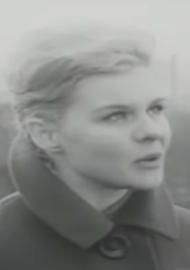 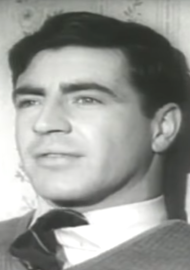