Produced by Harold Fielding and directed by Joe Layton, this near four hour long musical version of the Margaret Mitchell classic novel and 1939 movie opened at the Theatre Royal, Drury Lane in 1972, with a cast headed by June Ritchie and the American singer Harve Presnell.

Though elements of the adaptation were panned by some critics, reviews were unanimous in praising Ritchie’s performance as Scarlett.

The soundtrack by the London cast was released on vinyl by AEI, and later re-released on cd on the Kritzerland label in 2015.

‘From her touch of syrup accent to devices which find her acceptably to change costumes center stage, Miss Ritchie does everything right, singing acceptably, dancing better and projecting the shadings of the changing character.‘
(Austin American Statesman, 26 May 1972)

‘The only real performance in the show is given by June Ritchie…her portrait of a vain and cunning bitch is tempestuous and triumphant.‘
(Rex Reed, Chicago Tribune,14 May 1972)

‘Miss Ritchie brings to the wide-ranging portrayal all that it demands, from sensitivity and winsomeness to connivance and temper tantrums.  She also has an excellent singing voice.  In a comparison which will be understood readily by all who remember the movie, Miss Ritchie seems to be the stage reincarnation of Vivien Leigh.‘
(Tucson Daily Citizen, 17 June 1972)

‘[Miss Ritchie] sails through the show with remarkable zest and hers is the only performance of any dimension.‘

‘The spirited Miss Ritchie…distracts the audience from the play’s banalities and infuses its laggard scenes with life.  She is the driving force of this ‘Gone with the Wind’ and a delight to watch.‘ 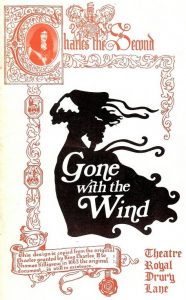 Gone with the Wind (interview with June Ritchie)

Few actresses would willingly give up a flourishing stage career to concentrate on bringing up their children.

June Ritchie, named for the role of Scarlett O’Hara in the forthcoming musical “Gone With the Wind,” is one who did. Only a year after scoring a resounding success in her acting debut opposite Alan Bates in the film “A Kind of Loving,” and at a time when she was much in demand for more film, television, and West End stage work in London, she turned her back on it all. She took seven years off, devoting all her time to her small daughter, Adelia. She explains it simply: “I felt my daughter was at the age when she really needed looking after properly.” (One must add that June could afford it – she’s married to a successful merchant banker.)

It’s a measure, though, of June Ritchie’s talent that, only a few months after returning to the stage, she has bounced back into the limelight by landing the plum role in “GWTW ” Impresario Harold Fielding, to stage the $280,000 extravaganza at Drury Lane theatre from May 3, describes this Scarlett as “the role of the decade.” He’s probably right. Apart from the fact that Scarlett never leaves the stage during the show’s two hours and 50 minutes, what actress wouldn’t give her eye teeth to play Margaret Mitchell’s coquettish, bitchy, delightful, all-woman heroine?

June at 30 feels her age will be an advantage in coping with the demanding character of Scarlett, who in the novel first appears as a 17-year-old. “If I wasn’t 30, I’d not be able to play her,” she says. “A younger girl wouldn’t have the emotional maturity. I mean, Scarlett’s a fascinatingly complex woman, with her self-deception, her daring, and her capacity for dealing with an emotional problem by saying, ‘Oh, well, fiddle-de-dee, I’ll think of it tomorrow.’ “For most women, when emotionally involved, the world stops, and everything is subject to what’s happening to them. Not Scarlett.”

June is not bothered by the inevitable comparison that will be drawn between her performance and that of the late Vivien Leigh in the same role. “You have to remember this will be a bit different – a musical rather than a film,” she said. “I saw the film about 12 years ago, when I was at the Royal Academy of Dramatic Art, and Vivien Leigh’s acting is about the only thing I remember of it. I thought her magnificent, but I won’t see the film again.

“I think one of our main ideas will be to get away from the image of Scarlett presented by Vivien Leigh. I shall probably keep my blonde hair.”

Harold Fielding didn’t think so, however. He said firmly that June’s almost waist-length blonde hair would have to go.

June had tremendous competition for the Scarlett role, although neither she nor Fielding would reveal the other names in the running. “It’s just too incredible that I’ve got the part,” said June. “There was amazing competition. I had two auditions in utter secrecy, I was sick with nerves, and I thought I’d done terribly. I went to France to get away from it all, then the moment 1 got back they said I’d got the part. It hit like a bombshell.”

And who will be Rhett Butler? That, for several weeks, was the question on the lips of everyone in the theatre world. Then one afternoon the phone calls went out. American actor John Gavin was the man.

An hour later, another call: Contractual difficulties, and John Gavin was o-u-t.

Translated, this read that Gavin’s agents had insisted on a clause allowing him to leave the show giving only one month’s notice. Harold Fielding wouldn’t buy this – he wants, he says, very long-term contracts.

He wanted an actor who would sign up for two years, and finally found one in Harve Presnell – all 6ft. 4in. of him.

Presnell was offered the role and flown to England to start rehearsals in a matter of days. He is a strong singer with classical training – Harold Fielding says this is essential for the Rhett role, which involves eight taxing songs. Presnell has done extensive concert work with Eugene Ormandy and the Philadelphia Orchestra, including a much-praised recording of “Carmina Burana.” He was a soloist with the Roger Wagner Chorale, and has done two seasons of opera in Germany. Harve, 39, says the role of Rhett Butler is the most important thing that’s ever happened to him.

“I’m a little stunned, and scared to death,” he said at an early morning Press conference. He had arrived from America late the night before and was due at his first rehearsal in under an hour. He had neither seen the script nor heard the music of “Gone With the Wind.” Essentially practical in his approach to his work, Harve prefers to work in musicals although he loves opera.

“Doing opera is like trying to stage a circus,” he said. “There’s no time and no money for the production. So recently I have tended to concentrate on musicals, nightclub work.”

Harve, who had two and a half years on Broadway starring in “The Unsinkable Molly Brown” and later making the film of this with Debbie Reynolds, is married and has a ranch in California. He is a keen racing driver and pilot, has his own plane.

Fielding is known as the toughest, shrewdest negotiator in show business today. “And I drive a very hard bargain,” he says. The man whose money spinning shows include “Half a Sixpence,” “Charlie Girl,” and “Showboat” regards success at Drury Lane as the height of his ambition. “It’s the epitome of everything I want,” he says.

He insists on knowing and personally deciding every detail of his shows. The day he signed June he insured her for $500,000. “I wouldn’t want to lose my Scarlett now I’ve found her, would I?” he said, smiling gently. Fielding knows every detail of his cost schedules. Asked how much had been spent thus far in travel expenses, he came back with: “Up to this moment transatlantic fares have cost £4724 ($9448). And I make everyone fly tourist.” To save paying salaries for extra dead bodies in the Sacking of Atlanta scene, Fielding is having thirty “corpses” made of latex. Weekly running costs for the show will be $30,000 in salaries, rent, and overheads. There’ll be a cast of about 74 and an orchestra of about 30 pieces. “I’ve already auditioned 882 people for the chorus,” Fielding said.

He has cast British actress Patricia Michael as Melanie Hamilton. The part of Scarlett’s love, Ashley ‘ Wilkes, will be played by 26-year-old Robert Swann, who has not appeared in the West End before but made a tremendous impression as the head boy in the film “If . . .” “Thirty-two countries have already made offers to buy this show,” Fielding says proudly. (Australia is one of the leading bidders.) “I’ve never known such interest. We’ll have a Royal World Premiere with Princess Anne there.

“June will be fantastic. She has a magnificent voice, a chest voice with a great deal of guts.

“She has terrific acting ability. From the first time I heard her on a cold, miserable Sunday evening during the power cuts, I knew immediately she had what we were looking for. It’s a great romantic story and she can do the romance all right. But Scarlett in many ways is such a bitch, and June has all the punch, drive, and verve to carry it off.”

June Ritchie was born in Blackpool, Lancashire. She left school at 16 with no serious thoughts of becoming an actress, and started work as a secretary in Manchester. She won a scholarship to the Royal Academy of Dramatic Art, and promised her parents, who had to make considerable sacrifices to send her to London, £50 ($100) from her first job as a professional actress.

She kept that promise when, as an unknown, she landed the starring female role in “A Kind of Loving.”

Made in 1962, this film was particularly daring for its time. In it, June took the then almost unprecedented step of stripping to the waist. Her other film and stage parts included “Live Now, Pay Later,” a film version of “The Threepenny Opera,” with Curt Jürgens and Sammy Davis Jr.

Last year she made a two man film, “Hunted,” with Edward Woodward to be released in London shortly.

At Christmas she played a lady chimpanzee in the Sandy Wilson musical “His Monkey Wife” at the Hampstead Theatre Club.

Oddly, it was this role, monkey suit notwithstanding, which first persuaded Harold Fielding that she might fit the southern belle crinolines of Scarlett O’Hara to a T. 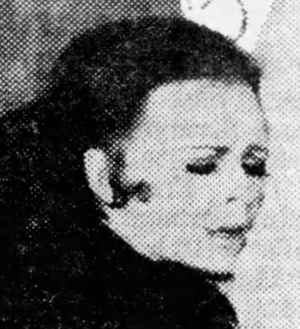 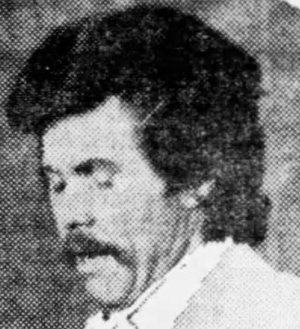